At the invitation of the Bishop, Antony Poggo, two mission conferences were planned and held in the Cathedral. The Kajo-Keji Diocesan RinJ Coordinator is the Dean of the Cathedral, Very Rev Canon Pianilee Samuel. He is to be assisted by the 8 Archdeacons who will coordinate RinJ in their areas. 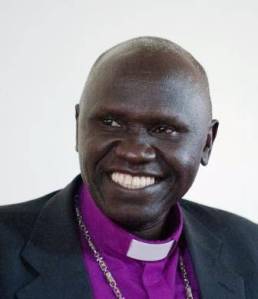 “It was a blessed time to have the RinJ team during the conference. It was very very  refreshing and spirit-filled conference marked with a revived worship, praise and dance that renewed the lives of those who attended the conference including the RinJ team.  The morning devotions and the evening sessions were great awakning moments where the participants came closer to Jesus Christ, and through repentance and prayer were renewed in their faith and ministry. Number of participants shared their spiritual and physical problems as they came forward for prayer and healing  especially at the evening sessions which were done in an open space at the diocesan mission compound, and some were reconciled, healed, revived and gained strength for the Lord’s ministry. The teaching sessions were dramatically marked with fun, illustrations, active participation and attentive listening. This enabled everybody to learn how to help others get rooted in Jesus. I appreciate the RinJ team for their skillful teaching. I would like to say the program and the approach is very good and it fitted well with our diocesan strategy basd on 2 Timothy 2:2, ‘train people who will train others also.'” 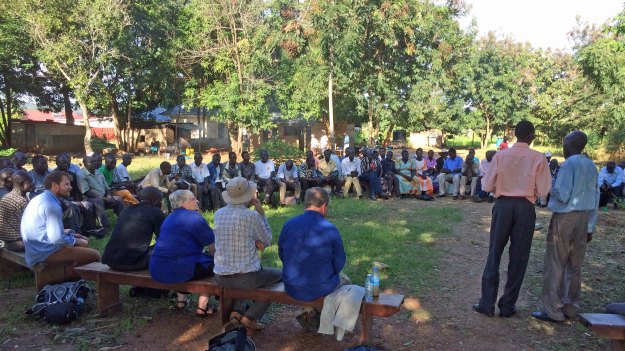 “The Diocese had planned well and thoroughly for the Conferences and arrangements went according to plan.106 people attended each conference and about 215 were awarded certificates. The Conferences followed the standard four-day pattern and started on time. The level of engagement, enthusiasm and hunger for God together with the Course material and teaching on Renewal in the Holy Spirit – were highly exceptional! There was a good mixture of laity and clergy at both conferences; the women were about 25% of the total.

On the last morning of both conferences we held a Testimony Session and a Q and A session. The Testimony session over ran both times but was so encouraging to everyone! At the end of the first Conference many reported a very peaceful sleep often the first in a very long time. 14 reported physical healing, nearly half the conference testified to inner healing, and there was one conversion.

During the second Conference there seem to have been up to 5 conversions; two gave testimony. At the testimony time everyone stood as those who had been encouraged and refreshed by the Conference. Those with new hope and energy from God – all stood. Ready to start small RinJ group – approx 90% stood. Those who had received physical healing – about 13 stood. Received inner healing – about 40. Felt the power of the HS on them in some way – 30-35 stood.

There were several testimonies in one form or another during the Conferences. One man’s mother was seriously ill in hospital, was likely to die, he left the Conference but was back the next day, saying that his mother had said ‘whether I live or die you go back to the Conference’; we continued to pray for her and improvements were reported.

A female Pastor who had become afraid to preach and take services said she was no longer afraid. Many reported good nights sleep after general prayer ministry sessions, and this was often related to fear and traumatic experiences. We prayed several times against Fear, and this was significant. One elderly man was jumping who could hardly walk before. A young lady had been orphaned as a child, her wealthy extended family had refused to help her and her brother, and later when she was the top student and ready to attend university they again refused help – she had come to the point of forgiving them.

The Team give thanks for this opportunity to see God at work; for so many praying for us and the Conferences and for the good health and protection we enjoyed. ‘..this is the Lord’s doing and it is marvellous in our eyes..’”

It was a particular joy to have two senior clergy from the Australian Diocese of Canberra & Goulburn on the team – this is the first time we have worked in partnership with an Australian diocese, and we look forward to deepening this in the future. As always, John and Gill returned home feeling that they had received far more from their brothers and sisters in Kajo Keji than they had given: 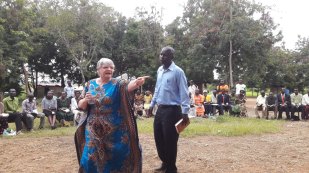 This conference had been two years in the planning. All the RinJ leader’s booklets had been painstakingly translated into Bari, and detailed preparations made by Bishop Anthony Poggo and his colleagues. In fact this conference was Bishop Anthony’s parting gift to the Diocese, as he left for London to take up his new post as Adviser for Anglican Communion Affairs. Bishop Anthony is an inspiring leader – his book on Nehemiah. ‘Come, Let us Rebuild’ bears witness to his passion for the Gospel. Our prayers go with him as he embarks on his new ministry. He will be succeeded by Bishop Elect Emmanuel Murye, who writes: “Regarding Rooted in Jesus, I strongly embrace it as a way forward to nurture the believers and reaching out the gospel to others.” We pray that he will know the Lord’s blessing as he prepares for his new role.

And last but not least, we give thanks for all those who prayed for the Diocese, the team and the conferences, for surely your prayers were answered!