Rooted in Jesus was introduced to the Diocese of Mityana, Uganda exactly one year ago now, at the invitation of Bishop Stephen Kaziimba. A joint Uganda-UK team led by James Tumwesigye ran two training conferences attended by 141 leaders. Canon John Musaasizi was appointed Diocesan Coordinator. It has been an enormous privilege to follow John’s progress over the last year, and in this blog we share some of what he has shared with us.

Rooted in Jesus conference at Mityana

Immediately after the RinJ training conferences, John responded: “I am very thankful to be involved in the Discipleship program of Rooted in Jesus. I completely buy into statements made by other people, whose conviction and experience led them to say that, “Rooted in Jesus Program is the best on the African Continent.” It starts where you are and progresses you joyfully into the adventures of growing into Christlikeness. Mityana Diocese is privileged to have such a program at a time when multitudes of people have subjected themselves under the Lordship of Jesus Christ.”

Since the conferences, John and his colleague Jethro have travelled tirelessly round the furthest reaches of the diocese, visiting groups and providing encouragement and support to the leaders. John has sent many inspiring reports of these visits and of his plans for the development of Christian discipleship within the diocese. The task of a Rooted in Jesus Coordinator is far from easy: keeping touch with people scattered over a wide area with limited resources is challenging; providing support to 141 inexperienced leaders is a huge undertaking; doing all this alongside existing full time ministry responsibilities is daunting. And yet John and Jethro have poured their lives into this task. Their testimony is that everywhere they have been they have seen the Lord at work, and that they have experienced his protection and blessing as they have sought to fulfil his commission to make disciples.

Jethro leads a group in Kalezi

Samuel, Lay Reader at Lwebituuti, and his mother

John’s most recent message concludes: “It has been wonderful getting to know all that you have shared with us. Your ministry experience, coupled with experiences of our ministry colleagues located in different parts of the world, has added more impetus to my incessant desire to reach God’s people for Christ through Rooted in Jesus program.”

John’s dedication and commitment offer an inspiring example of what the Lord is able to do through those who give their lives to his service. 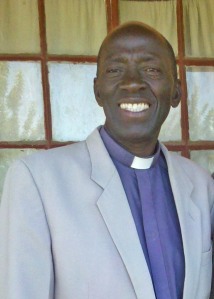 The original team was led by Ven Capt James Tumwesigye and Revd William Musisi from the Dioceses of East and South Rwenzori, with Revd Ian and Mrs Sue Smale and Mrs Dorothy Spencer and Mr Peter Silverwood from the Deanery of Overton, UK.