A Rooted in Jesus conference was held in Kadugli from 8th to 11th October 2019, at the invitation of Bishop Hassan, the suffragan bishop of the diocese. The team was led by Canon Andrew Evans, with Revd Barry Blackford, Christopher Fielden, Ben Jarvis, John Joy and Pete Waterman, all  from the linked deanery of Bradford in the Diocese of Salisbury. 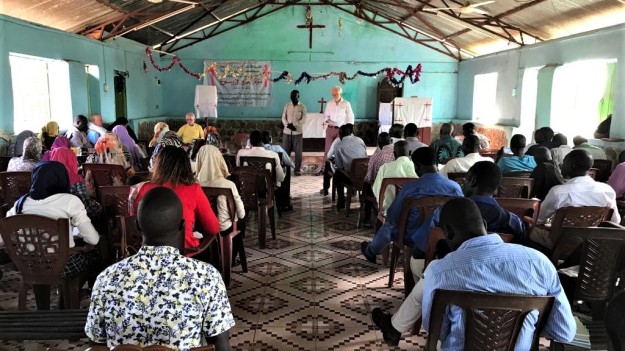 “In recent months Sudan has undergone regime change. There is a new Prime Minister and a government shared between civilians and the military which is intended to lead to elections in three years’ time. The people of Sudan have great hopes that this will bring greater freedom, a relaxing of sanctions which are currently crippling their economy, and peace between warring parties.

“Kadugli is situated in South Kordofan province where the government have been fighting the rebels in the Nuba Mountains, which lie to the south of Kadugli city and towards the boundary with South Sudan. The rebels are the Nubians, a people who have been Christian for centuries. A large part of Kadugli Diocese lies in the Nuba Mountains and is currently inaccessible from the north. There has been a ceasefire for the past two years, which has resulted in a stand-off between the two sides. If you don’t arrive at Kadugli city by 5pm on any day, access will be denied! Kadugli is still very much considered to be a war zone, although we did not feel at danger at any point.

We arrived in Khartoum in the early hours of 6th October, saw some sights in the city on that day and departed for Kadugli early on 7th. The journey took just over ten hours by road, covering a little over 400 miles, with one puncture and a section off-road where the road had been washed away in the rains.

Bishop Hassan had managed to secure for us an invitation from the governor of South Kordofan province, who had arranged for us to be accommodated in a government hostel and to receive food provided by them. This was very generous. This positive attitude to Western visitors would have been unheard of even a few months ago, so this is evidence that things are changing for the better.

“The Churches in Kadugli city have undergone a very difficult time in the war and they described all Christians as being the targets for the military under the previous regime. As such all the denominations have almost blended into one, as the churches clung together in the face of persecution. The Christians in Kadugli were amazed that six white people from England had been allowed to travel there, and they shared that it was an encouragement more than they could put into words that we had come to express our solidarity with them as brothers and sisters in Christ. 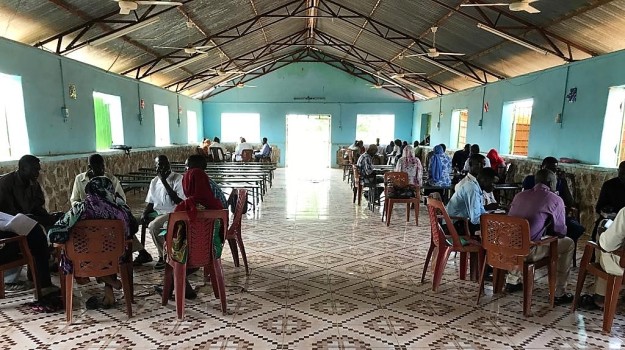 Six denominations were represented at the conference, with 75 people attending in all. The local Roman Catholic priest told us that the wars had drawn Christians of all denominations closer to each other – they had all been perceived as the target by the Islamic government. He also said the people were traumatised by war and were much strengthened that Christians had come from England to encourage them.

The RinJ teaching was enthusiastically received. The delegates readily accepted the need for discipling in the churches and were keen to start the programme. Group working was largely unfamiliar to them as a style of learning. As the conference progressed, they became more relaxed and the groups started to work well.

The picture below shows Andrew making the point, with the aid of a bicycle, that we need more than just teaching; we need training! One of the most exciting aspects of the conference was the work of the Holy Spirit, and the training was evident here. The Holy Spirit’s work over the four days of the conference was gentle, but deep and profound. They were not used to asking the Holy Spirit to come and then waiting in God’s presence, while he began to move. On the first day, some arms were folded, as if they weren’t sure this was OK but as the Holy Spirit came upon them, some people were healed without anybody asking for healing. By the end of the conference people were praying for each other with the laying on of hands and in the power of the Spirit.

“There were some wonderful words of knowledge sent to us from Nicky King in the congregation of St Katharine’s Holt – one of a lady dressed in bright yellow and green with similar head covering who had a snake bite. We read this out in the conference and the lady did not seem to be there. Then Barry noticed a lady of that description come in – she had been working preparing food for the delegates. Barry asked her whether she had a snake bite. She did. She had received a bite on the ankle in the past few days. The lady was prayed for and not only received healing for the snake bite but for two other conditions as well.

There was another word – ‘I saw two men fighting. I think it represents 2 areas, 2 districts which have been opposing each other for some time like a long feud that had shown no signs of hope of ending but I saw an angel come with a sword. He separates the 2 men and then puts his sword in the ground. A river appears between them. They each go away from the edge still looking angry but the angel goes to each in turn and tears come. They now come back to the edge of the river and lean across and shake hands. Some kind of important reconciliation going on.’ Nicky had no idea of the situation in Kadugli when she gave that, but the word had a profound effect on Bishop Hassan who was sure it was from God, and there are talks about to happen between the new government and the rebels in the Nuba mountains!

Healing the traumas of the past

“There were many healings and these are just a taste of them. There was a young boy who was so full of fear that he was permanently attached to his mother’s skirt. He was healed and was gradually building up confidence before our eyes and who went home on his own with his friends for the first time ever.

Every time we invited the Holy Spirit to come, more and more people were released.  This was of particular significance for a man who responded to a word about giving ‘locked up hurts (from long ago) to God’ and that God was ready to take them and replace them with joy. As he was wailing and crying out in response it revealed the release of some very deep and unspeakable pain. The next morning the same man was singing his heart out, dancing for joy up and down the aisles – face beaming with smiles. Most surely God had released him and given him some new peace.

There was also a lot of release of pain among the women at the conference, much dating from the war years. Pete prayed for a lady having her 11th baby, who was in pain. God showed him that the baby was on its side and pressing on her internal organs. He prayed, the baby moved and the pain went completely.

“The aim of the conference was for participants to go home with the confidence to form a group of 12 people to be discipled, just as Jesus did, and to start to deliver the programme which is about making disciples who in turn go and make more disciples. We had a very joyful commissioning of the delegates with lots of proud certificate holders. Each leader was given a Leader’s Introduction and Book 1 of Rooted in Jesus in Arabic, and the programme will be coordinated by Babuj Kanidi, the Diocesan Secretary.

“We started our journey back on the Saturday, making a visit to the church in Dilling on the way. We arrived back in Khartoum as it was getting dark. We had supper with Bishop Hassan’s family and caught our return flight in the early hours of Sunday morning arriving back at Heathrow at 1.30pm.”

To find out more read the report on the Salisbury diocesan website here, or at St Katharine’s Holt, here.

Rooted in Jesus is published and supported by the Mathetes Trust.