Created in 2002, Rooted in Jesus has now been running for 17 years. During this time it has been introduced to some 90 dioceses, denominations and theological colleges in 16 African countries. Over 13,000 people have now been trained to lead Rooted in Jesus groups!

Many of those who have adopted Rooted in Jesus now provide their own ongoing training and support, fulfilling our vision that the programme should become self-sustaining in each province or area. We invite each diocese or network to send us an annual report, and we have been delighted to receive many testimonies to the impact that Rooted in Jesus is having as a tool for church-planting, discipleship training and ministry to families. For some highlights, read on – or download the full Annual Report HERE. 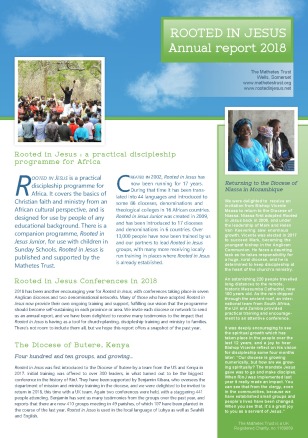 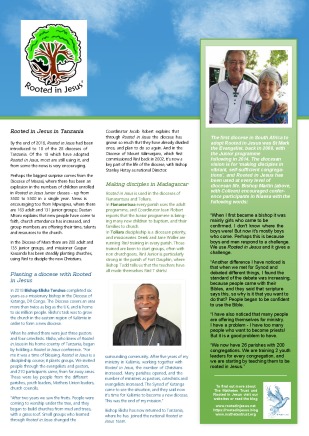 During the course of the year Rooted in Jesus conferences were held in seven Anglican dioceses and two denominational networks, and we reported on some of these as they took place:

Following the second Rooted in Jesus conferences in the Diocese of Butere, coordinator Benjamin Kibara reports that there are now 410 Rooted in Jesus groups meeting across the diocese, of which 107 were newly planted in 2018.

Just under a year on from the first Rooted in Jesus conference in the Diocese of the Free State, Bishop Dintoe reports:

“We have visibly seen how Rooted in Jesus has affected the local people, and how people have given their commitment and their life to the Lord. We notice men who never really thought that they could give their services volunteer to work in the church, paint the roof of the church, do maintenance at the local church. We have seen women with spades and forks doing gardening and making vegetable gardens for themselves and also to feed the community and the people around them. But it’s really about bringing people to the Lord Jesus Christ, who feeds us, who quenches our thirst, who heals us, who has given the promise that he will walk with us each and every step of our lives. We are very excited about Rooted in Jesus.”

November 2018 saw the inauguration of the new Diocese of Nampula in Mozambique, and a Rooted in Jesus conference was held the very next week! Bishop Manuel has worked with Rooted in Jesus for many years in Nampula’s parent diocese of Niassa, and a few months later he explained:

“The programme of Rooted in Jesus has opened up many opportunities. As a new diocese we faced a lot of difficulties: where to begin? We had three priorities. The first is to transform our congregations; then to train leaders, and then to plant new churches. And we began to ask: ‘How can we manage all that?’ There was a risk of starting as an institution rather than growing people. But then with Rooted in Jesus, we were handed a tool that got us exactly to the place we wanted to reach.  Thanks to Rooted in Jesus, we could train leaders within the congregations, and plant new churches.  Those who had already taken part came together in groups: 35-40 groups. And within these groups, we began to see fresh individuals, fresh leaders and fresh congregations emerge. Rooted in Jesus has given us a fresh vision for making disciples, creating new believers. The  programme which is simple, practical but always very profound. It’s a spirituality that challenges us all.” 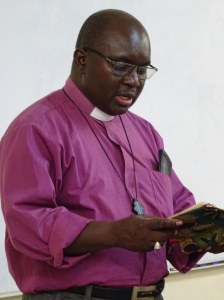 News from those already using Rooted in Jesus

Rooted in Jesus is now in use in 8 dioceses in Uganda. The Diocese of Bunyoro Kitara, Uganda, introduced Rooted in Jesus six years ago. Coordinator Joyce Asaba reports that many groups are now completing the course, and new groups have been planted:

“Group members say that they have really benefited from the course; some have become leaders and formed other groups. They also say that scripture memory has helped them in ministry and in their daily lives. Others say their lives have changed completely.”

At the opposite end of the country in the Diocese of Mityana, Coordinator John Musaasizi and his colleagues visited now fewer than 32 churches in the course of the year, encouraging entire congregations to commit to Rooted in Jesus and supporting the group leader in each place. They have seen many come to faith, and many changed lives.

Elsewhere, the Diocese of Eastern Zambia now runs all its own training for both the adult and Junior programmes. Fr Kapomba Sekeleti reports:

“People are now rooted in Jesus. Things have changed in the lives of our ministers and lay leaders. We use RinJ Junior for child baptism preparation, and RinJ adult for adults. The Rooted in Jesus material is simple and easily understood. We have seen people returning to faith, deepening their prayer life, increasing their commitment to church. We have seen growing interest in the Bible. And people are becoming grounded in the word of God, they love the church more, they are growing the church. Some have the confidence to preach the word of God, some to pray for others. These are some of the fruits we have seen because people are rooted in Jesus.”

In Tanzania, Rooted in Jesus has now been introduced to 18 of the 28 dioceses of the Province. Perhaps the biggest surprise comes from the Diocese of Masasi, where there has been an explosion in the numbers of children enrolled in Rooted in Jesus Junior classes – up from 3500 to 5500 in a single year. News is particularly encouraging from Mpwapwa, where there are 163 adult and 131 junior groups; Coordinator Dustan Mtoro explains that new people have come to faith, church attendance has increased, and group members are offering their time, talents and resources to the church – and took just three months to raise the money needed for the construction of a new diocesan building!

Tanzanian dioceses which have hosted RinJ training are shown in green
(Kibondo, formed in 2012 from the Diocese of Western Tanganyika, not shown)

News from our partners

Rooted in Jesus has been adopted by a number of independent organisations and denominations. Foremost among these is Dignity, who in the last ten years have used RinJ alongside their own materials to plant 700 cross-denominational ‘Life’ groups in rural areas, initially in Zambia but now also in Tanzania, Angola, Kenya and Namibia. Focussing not on the church but on the community, group members support one another and those in need regardless of church affiliation, social status or lifestyle, motivated by their growing faith in Jesus – and the result is a trail of stories of what they refer to as ‘amazing lives, everyday miracles’. It is a huge privilege to be able to make a small contribution to this remarkable story. To find out more visit Dignity’s website HERE.

Last but of course not least, Rooted in Jesus has often been used for planting not only churches but even whole dioceses. In DR Congo, Bishop Elisha Tendwa completed six years as a missionary bishop, using Rooted in Jesus to plant groups and build Christian communities in remote, unreached areas – to read his story and watch a video interview click HERE. 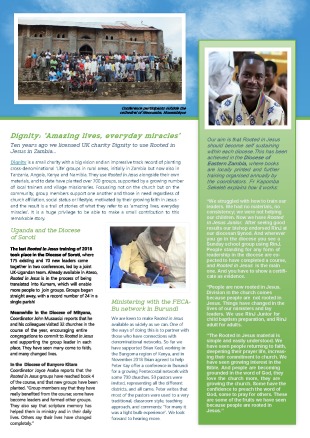 Why do we need to be rooted in Jesus?

‘Now the eleven disciples went to Galilee, to the mountain to which Jesus had directed them. When they saw him, they worshipped him; but some doubted.  And Jesus came and said to them, “All authority in heaven and on earth has been given to me.  Go therefore and make disciples of all nations, baptizing them in the name of the Father and of the Son and of the Holy Spirit, and teaching them to obey everything that I have commanded you. And remember, I am with you always, to the end of the age.”‘
Matthew 28.16-20.

Rooted in Jesus is published and supported by the Mathetes Trust. The word ‘mathetes’ is the New Testament term for our English word ‘disciple’, and the Great Commission by Jesus underpins everything we do both here in the UK and with our partners in Africa.