Last year we were privileged to be able to send a Rooted in Jesus team to the Diocese of Kajo-Keji in South Sudan. Long in the planning, the conferences had been delayed due to the political instabilities which had made travel dangerous for team and participants alike. But by 2016 things were more settled, and in October two hundred and sixteen clergy and lay leaders were trained to run Rooted in Jesus groups.

HOWEVER since then the security situation has grown much worse, and 90% of those living in the Diocese have now been forced by renewed conflict and famine to flee to refugee camps in Uganda. We are watching yet another human tragedy unfold before our eyes.

The political situation in many parts of South Sudan has drastically deteriorated since the 2016 Juba conflict. Although the greater Kajo-keji region experienced relative political stability and calm for the rest of 2016, the situation suddenly took a turn for the worst following clashes between the government soldiers and the SPLM/IO in the Mondikolok and Mere Bomas of Kajo-keji County … The entire Kajo-Keji region now faces severe humanitarian crisis with at least 97% of the population fleeing their homes and villages. At the beginning of the crisis, the church provided shelter for at least 50% of the population, most of whom eventually fled to refugee camps in the Moyo and Adjumani districts of Uganda as the conflict escalated. Only about 3% have now remained in the villages or fled to Internally Displaced People’s camps such as Ajiyo, Kerwa and Logo, where they face severe hunger, water shortage, disease, post conflict trauma, and many more. In the refugee camps of Moyo district where most of our people have settled, the humanitarian crisis is even worse. Severe hunger, water shortage, lack of shelter, poor or no health care, poor or no educational facilities have been cited; as well as high levels of tribal animosity and psychosocial stress. Recent reports state that over 200,000 refugees mostly from Kajo-keji County have settled in the refugee camps of Moyo district, and an even bigger number have settled in refugee camps of Arua, Adjumani and Yumbe districts. With the continued conflict in South Sudan, refugees continue to flock into Uganda. Travels to and from Kajo-Keji remain very unsafe. 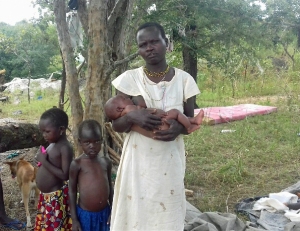 “We left our home in Lainya at the height of the fighting there, we witnessed many civilians killed, women raped, homes burnt and property looted. My husband is not with us and we do not know where he is. I just hope he is alive.”

Despite the obvious dangers, Bishop Emmanuel and his colleagues are doing all they can to alleviate the suffering of the people of Kajo-Keji. They have set up a new office in Moyo, in Uganda, and are visiting the refugee camps and appealing for help with food, water, shelter and medical care. Aware of the crippling mental and emotional burdens borne by many of those in the camps, they also want to provide emotional and spiritual support through the following peace building and reconciliation activities:

A request for help

Bishop Emmanuel has asked us to help with the second of these, evangelism and discipleship. He writes:

“The believers need Rooted in Jesus at this time of distress and spiritual need. Rooted in Jesus is the only tool and way forward to nourish the Christians and make the newly born Christian grow… We went and met the people in one of the camps in Palorinya. The meeting was attended by 37 council members and heads of department.  Among the council members, 10 were trained Rooted in Jesus group leaders. They reported that they had been busy erecting their tent but now as they are almost settling they will be ready to start the groups. The other challenges they raised was that, the group members they have started in Kajo-Keji got scattered into different refugee camps, can they start new groups? I encouraged them that they can start new groups and this is the time where people need the word of God seriously and deeply rooted in Jesus Christ. The mission and evangelism coordinator is ready to move in the camps to supervise those who are going to start new groups.”

He has appointed a coordinator, Nelson Saya, to work with Pianilee Samuel, the Diocesan Mission Coordinator, in providing support and encouragement for the Rooted in Jesus group leaders within the camps. But he points out that the group leaders are stationed in different camps, and the distances between the camps are great.

We would like to be able to help the Diocese in its desire to minister to the people of Kajo-Keji. When we first went there, South Sudan was the youngest country in the world, full of joy and optimism. Now its refugee crisis has been described by the UN as the most worrying in the world. We cannot influence the political situation or do much to alleviate the physical needs of those in the camps. But we can pray, and we can do something to help with the emotional and spiritual needs of these suffering people – both those who know Christ, and those who have yet to meet him.

“We met a family during the bishop’s official visit to Morobi refugee camps  that was mourning the loss of a relative who burnt herself to death as a result of psychosocial stress, and is survived by five orphans and a husband who is an alcoholic.”

One of the most powerful memory verses in Rooted in Jesus is James 4.1:  My brothers and sisters, whenever you face trials of any kind, consider it nothing but joy,  because you know that the testing of your faith produces endurance;  and let endurance have its full effect, so that you may be mature and complete, lacking in nothing. It’s a verse I was embarrassed to share with group leaders in Tanzania during a time of famine there, aware that it was so easy for me to say, so hard perhaps for them to hear. And yet one of them said that learning this verse had changed her life – as she struggled to feed her children, she had found complete peace.

What can we do?

We have no magic wands for the situation in South Sudan; but we want to provide whatever support we can. Nobel prize winner Alexis Carrell once said that ‘prayer is the most powerful form of energy we can generate.’ Please pray, particularly for Bishop Emmanuel, for Samuel Pianilee and for Nelson Saya as they risk their lives to help their people. And if you would like to help us to help them in tangible ways – they ask particularly for assistance with travel costs as they move between the camps – you can make a donation either by sending a cheque payable to The Mathetes Trust to the address below, or online via the Support page of our website. We hope to make a bank transfer to the Diocese’s Ugandan account soon.

And if we know that he hears us in whatever we ask, we know that we have obtained the requests made of him. 1 John 5.15.