Rooted in Jesus Junior is a Sunday School discipleship programme for use with 8-14 year olds. Normally introduced once the adult programme has been in use in a diocese for some time, it had now been adopted by 11 dioceses/denominations. Jonathan Rendall has been talking with some of the coordinators. 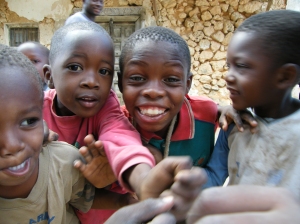 Revd Godson Madibi reports that in the Diocese of Morogoro, Tanzania, a RinJ Junior Celebration was held in the cathedral on Easter Day, for children and their parents. To Godson’s amazement and delight, over 1200 children attended this event, which included singing, praying worshipping, reading the Bible together, drama and preaching (by the children). Parents were so enthusiastic that they have offered to sponsor future gatherings; Godson himself has experienced a renewal of spirit and a deepening of his calling to oversee the Junior programme across the diocese. Bishop Godfrey has asked Godson to start further groups across the diocese, and to made contact with all existing groups. Godson has begun to travel from parish to parish encouraging the Junior teachers and clergy; he asks for our prayers.

The Diocese of South Rwenzori, Uganda

RinJ was introduced to this diocese, at the invitation of Bishop Jackson Nzerebende, back in 2008. Last year we sent a team to train Sunday School teachers to use RinJ Junior. Revd William Musisi reports that Junior is now growing across the diocese, with 7 archdeaconry coordinators appointed and 98 groups established in the parishes. William’s own church in Bwera, on the Uganda/Congo border is growing, with 2 Junior groups meeting on Sundays; the children gave the readings and shared their testimonies at a recent Family Sunday service.

Exciting reports are coming in from the archdeaconries too. William told Jonathan of the recent one-week mission held in Kasese, with one day being dedicated entirely to work among children – over 1000 children attended a day rally and marched through the town, all the Junior groups being represented, and new groups are now planned.

William and his previous colleague Revd James Tumwesigye are leading a joint UK/Uganda RinJ team to the Diocese of Mityana later this year. 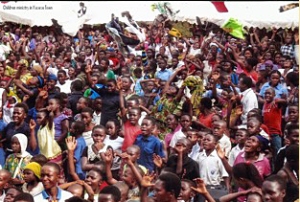 Growing ministry in the Diocese of Eastern Zambia

Under the leadership of Bishop William Mchombo, this diocese has been using RinJ since 2008 and RinJ Junior since last year. The Junior programme is coordinated by Revd Abraham Phiri. Abraham reports that there are now 60 Junior groups meeting across the diocese, all of which are now on Book 3. Children are enjoying the groups so much that they have begun to invite their friends to church; many have real testimonies of how the Lord is working in their lives.

Nicole Corlew has sent a report on the recent combined RinJ and RinJ Junior training conference held in Polokwane, in the Diocese of St Mark the Evangelist. 20 adult and 19 Junior leaders were trained, including a woman who plans to use Junior for the children participating in her church’s feeding scheme, a youth leader from the cathedral who wants to provide something for the younger siblings of the teenagers who come, and a teenager named Frank who led the best practice session Nicole has ever seen! The conference was opened by Bishop Martin Breytenbach, and the teams led by Nicole Corlew (Junior) and Jack Kudumela (adult). We are dismayed to learn that Jack has since suffered a stroke, and we invite your prayers for him. To read Nicole’s report click here. 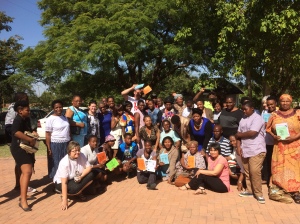 Robert Sihubwa and the Diocese of Lusaka

Revd Robert Sihubwa is the vicar of St Peter’s, Lusaka, a church whose congregation has multiplied 4 times since he took up his post there a year ago, reaching its current size of 450 people – one of Robert’s recurrent tasks is that of buying new chairs! Robert is using RinJ Junior at St Peter’s as well as acting as coordinator for the diocese.

Alongside his local roles, Robert is the Africa Secretary for Teen Challenge, and will act as General Secretary to the Anglican Consultative Council meeting in April 2016, which is to be held in Lusaka. The ACC has been asked to prepare a paper on discipleship for the entire Anglican Communion (Alison Morgan is one of the contributors to this paper), with a view to the establishment of a Decade of Discipleship. Robert is keen to promote discipleship at both local and national level, and the Diocese of Lusaka has set discipleship as their key agenda for the next three years. A focus group is being formed, with the aim of planning for discipleship training for children aged 5-10 across the diocese; Robert anticipates that RinJ Junior will be the key driver for this programme.

Captain Joshua Opondo is RinJ coordinator for the Diocese of Maseno South. Joshua is also an experienced RinJ team member who has provided both RinJ adult and Junior training in other dioceses; he is also the Provincial Youth Coordinator for the Anglican Church of Kenya.

Bishop Stanley Hotay, Director of RinJ Tanzania, was the main speaker at the recent Provincial Youth Conference, and Joshua is now working with the Provincial Youth Department to consider how best to promote discipleship among young people across the Province. At home, Joshua has introduced Junior to the Cathedral, where he is on the staff, has used the adult course for a highly successful confirmation class, and is working to support the groups across the diocese – where RinJ was introduced less than a year ago.

‘The best decision anyone can ever make, at any point in life, in any circumstance, whoever they are, wherever they are, whatever they are, is to become a disciple of Jesus Christ’ – Justin Welby, Archbishop of Canterbury, in his Lambeth Lecture, March 2015.

At Rooted in Jesus we are committed to supporting the vision of the Anglican Communion to help people of every age and every nationality grow as disciples of Jesus.