2014 has been a busy year for Rooted in Jesus, which has continued to expand exponentially. The RinJ programme is now in use in 71 dioceses or denominational groupings in 15 African countries, with the RinJ Junior programme in use in Sunday Schools in 11 dioceses or networks in 4 countries. 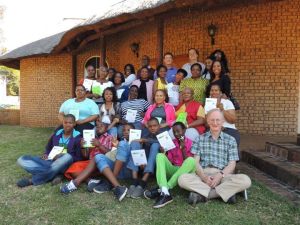 RinJ Junior is introduced to the Diocese of St Mark, South Africa

Introductory RinJ conferences were held this year in the Anglican dioceses of Katanga (DR Congo); Lake Rukwa, Victoria Nyanza, Rorya and in St Philip’s Theological College Kongwa (Tanzania); and Maseno South and in the Bungoma Pentecostal network (Kenya). Followup conferences were held in Kigali (Rwanda); Muyinga (Burundi); Southern Highlands, Shinyanga and Kibondo (Tanzania). Junior conferences were held in Eastern Zambia, South Rwenzori (Uganda), St Mark’s and Mthatha (S Africa). In all 718 new RinJ and 150 Junior leaders were trained by UK and Tanzanian teams. Detailed reports for all these visits can be found on the Rooted in Jesus website.

RinJ is funded exclusively through direct  donations from individuals and churches (team members cover their own costs), and in 2014 this was just about enough to enable us to honour all the invitations. We were delighted in November to receive a generous grant from the Diocese of Lichfield’s 2014 Lent Appeal, and we have just heard that RinJ Tanzania’s application to the Anglican Communion Fund has also been successful. We are very grateful to all those who have helped support RinJ this year. Prayer support continues to be provided by Clemency Fox and our team of intercessors – team members often comment on what a difference this makes.

Team members have continued to come home refreshed and renewed; a typical response comes from Clive Devonish, who wrote:  “I found the visit both challenging and rewarding. The conference exceeded my expectations. The delegates saw and experienced the physical, spiritual and mental healing of many people. My experience in Africa will have a positive long lasting impact on my ministry in the UK.”

Alison has continued to post incoming news from dioceses using RinJ on the website, and to update the RinJ blog monthly with reports from returning teams. It is interesting to note how the hardest work is often done in the poorest places – this year the two coordinators in the Diocese of Katanga, DRC, and the Youth Department in Kigali, Rwanda, have been conspicuous for their assiduity. “Pray for us,” writes James Mayundo from the missionary diocese of Kalémie in DRC, for “poverty leads people not to live in peace and always have a forlorn look and dim face.” Despite this, RinJ groups have been established in 4 parishes, where James notices great growth in faith, increased church attendance and an outpouring of love between members; in the parent diocese of Katanga there are already 53 groups. From Kigali Ruth Kamatali wrote, writes “Here in Rwanda God is doing great miracles through Rooted in Jesus of which soon you will receive reports from visited groups” – there are plans to roll out RinJ to the 700 home cell groups in the Diocese in 2015. In Tanzania the team arrived in one diocese to find great conflict between bishop and clergy; just 3 months later we have had an encouraging report from a very determined coordinator who talks of groups growing, and plans for deanery followup days. The two regional coordinators, Canon Jacob Robert and Bishop James Almasi, are supporting the diocesan coordinators as well as overseeing RinJ in their own dioceses. In Mara Jacob reports that they now have  Junior groups. This testimony was sent by Jacob on Boxing Day:

“In Africa, testimony has power in it, it is an easy way of presenting a message to  audience or individuals. Recently I visited a group at Mazame parish just near Musoma town and found an interesting  testimony from three sisters who, because of their parents’ divorce, remained alone at home, after their father ran away from home. Life became very difficult for them, this caused two of the three to decided to sell their bodies (prostitution) for their daily bread. They stayed in that life for a  long time, until they heard about the love of God. The Family of one heart and mind [RinJ group] meets near their home. One day one of them went to fetch water in one of nearest springs and saw people gathered in a neighbouring home. She went back home and told other two about the gathering. They went together to hear what is going on. The word was about the Love of God without measure. It touched their hearts  and gave them a bad image of their parents. The message reminded them to love their parents. The message reminded them to love one another. They have now planted a church with more than 130 Christians.”

Many dioceses have provided recent feedback, and this can be accessed on the Rooted in Jesus news page.

Worshipping God in the Diocese of Southern Highlands, Tanzania

RinJ UK has so far received conference requests from 18 dioceses for 2015 (of which 7 in Uganda), while RinJ Tanzania has 12 requests and Growing the Church has 11 requests. Some of these are outstanding from 2014 due to political instability and administrative challenges, and others are new invitations.

Our thanks are due to the many people, churches and organisations who have once again given sacrificially of their time and resources to Rooted in Jesus – and particularly from the UK to Frances Hazell, Jonathan Rendall and Linnet Smith, who have worked tirelessly to support and help develop RinJ.