We have had a busy few months, with Rooted in Jesus Junior conferences being held in April in the  Diocese of Eastern Zambia and May in the Diocese of St Mark the Evangelist in South Africa (click to read the reports) – both of which have been using Rooted in Jesus for some time, but now wish to extend the programme to their Sunday Schools. 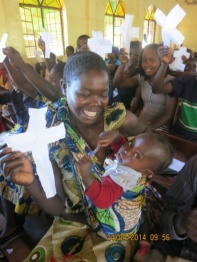 RinJ Junior is proving very effective; the parish of Mkuti in Tanzania which has been using it for a couple of years wrote recently to report on their 100-150 strong Sunday School group:

“We are proud for the following achievement:

Working with new networks in Kenya

Also in May, a team led by Brian Keel introduced RinJ to two Pentecostal network of churches in Kenya, Glad Tidings and Vine International. Groups have already started, and early feedback is promising. Pastor Daniel Makecho, who is overseeing a number of the new groups, reports: 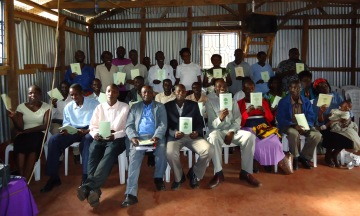 Groups are also growing in Tanzania, not least in the Diocese of Mount Kilimanjaro where Charles Unjiro reports that 12 new groups have been started in Moshi by those who have completed the first book of RinJ together. RinJ is being used for confirmation classes throughout the diocese, where 60 new churches were planted in 2013. Charles comments: “I thank God for this course of Rooted in Jesus because it brings real change to my own life; the roots have added to me day by day, when I read and teach lessons from the book, and I have many things to share with others. One of my group members said, ‘even if we are many, this book is like speaking to us individually’; another said, ‘this book is a revelation from God’ – and I agree with her.”

News from Zambia is good too; Jon Witt of Dignity Worldwide has contributed an article entitled ‘Lives transformed in Africa’ for ReSource magazine on the Life Groups he oversees in Zambia which use RinJ – you can read it here. There are currently some 139 groups meeting in various parts of Zambia, with a new local leadership team taking increasing responsibility for them. Jon reports:

“The overall trends are that groups are progressing through the books (Rooted in Jesus & Love Your Village) at a slow, steady pace and that many people are being encouraged and becoming Christians. Many groups have continued to be useful in their community. Some are making small changes in their communities that no doubt make large changes to individuals, whilst other groups are making changes that affect the community as a whole. All show a change in togetherness and focus within communities.

To find out more visit dignityonline.org.uk.