2013 has been the busiest year yet for Rooted in Jesus, with teams working in 22 dioceses to introduce or support Rooted in Jesus; and just one conference to go. RinJ is now in use in 59 dioceses or denominations, with 16 new invitations for next year as well as a number of followup conferences. Translations are always in progress, and RinJ is now in use in 15 African countries, with plans for a further 3 in 2014.

Feedback from recent conferences is encouraging. A team led by Mike Edson has just returned from the Diocese of Kajiado in Kenya,  where they worked with 80 leaders in two centres. Mike writes:

In September a team led by Fr James Almasi returned to the Diocese of Mpwapwa in Tanzania, where RinJ was first introduced in 2011, and is now ably supported by coordinator Dunstan Mtoro. 160 leaders attended the conference, which means that in addition to the 96 groups currently running, another 100 new groups are now being started. The conferenc e was apparently marked both by answered prayer and much joy and laughter. Team member Hilary Buckingham brought back an encouraging testimony:

At the conference in Mpwapwa

September also saw the first RinJ conference to be held in the Diocese of Natal, South Africa, where 56 leaders were trained by a team from Growing the Church. The conference was held in Winterton in September 2013, and attended by participants from the Archdeaconry of Uthukela and representatives from World Vision and Philakahle. For a report by Archdeacon John Green (and a remarkable testimony from one of the participants, previously a traditional healer but now co-leading a RinJ group) click here.

Conference participants in the Diocese of Natal

News has also been coming in from dioceses where RinJ has been in use for some time. Bishop Samuel Enosa of the Diocese of Nzara in South Sudan wrote “There has been tremendous progress in the Rooted in Jesus work in the parishes. many groups have been formed and I am delighted with the work Rev. Josephate has been doing. A visit in March will be very good to strengthen the ministry.” Capt William Musisi, coordinator in the Diocese of S Rwenzori, Uganda, writes that the original 40 RinJ groups in the diocese have now become 100. Of these, 60 have completed book 3 and 40 have completed book 2; they would like to introduce Rooted in Jesus Junior to their Sunday Schools next year. Revd Mupugazi Bwanamuzuri writes from the Diocese of Nord Kivu – located in the most troubled area of DR Congo – that new groups have been started in eight villages, and the Baptist church has asked him to introduce the RinJ programme to their pastors. He too is looking for another conference next year. 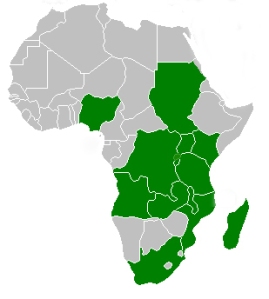 Countries where RinJ is currently in use

Rooted in Jesus Junior is now growing strongly in the Diocese of Mount Kilimanjaro and the Diocese of Mara, Tanzania. Canon Jacob Robert sent this testimony, from a 13 year old boy named Joakim Chacha:

Jacob commented, “truly, the Lord comes to save!” Jacob also reports that the Junior conference held in June has led to a transformation in how Sunday School teachers perceive their ministry to children. Revd Grace Daudi has been appointed children’s coordinator, and has been visiting the new Sunday School RinJ groups in the parishes – there are 87 Junior groups, of which 64 are doing very well and of which 23 need further encouragement! 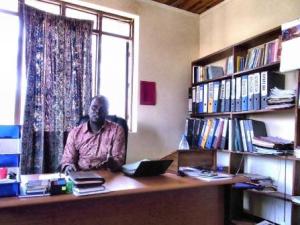 Canon Jacob Robert of the Diocese of Mara

Meanwhile Bishop Stanley Hotay reports that there are now some 2000 children in the new RinJ Junior groups set up after the conference in June in the Diocese of Mount Kilimanjaro, Tanzania. Coordinator Charles Unjiro reports from the smallest deanery, Kilimanjaro, that “Through this syllabus we believe we shall have a strong believers or people who have a good strong roots in Jesus from a little age. We have 322 Sunday school children taught in this deanery with are number of 19 Sunday school teachers and 11 assistant teachers.” Meanwhile the atmosphere amongst the pastors was transformed following the visit by the RinJ team last October, and this change has proved permanent: “there is now great unity, and those who repented at the conference are now among the most committed and active within the diocese,” +Stanley commented. The cathedral are exploring their future and asking some hard questions of themselves, RinJ is now the standard requirement for confirmation preparation, and they have planted 30 churches this year. I am looking forward to preaching in the cathedral on Advent Sunday!

The potential of a child in Tanzania!

In the Diocese of Niassa, Mozambique, Rooted in Jesus has been in use since 2006. Coordinator Helen Van Koevering wrote 3 years ago that “Rooted in Jesus is the basis for all our ministry and mission training, supporting as it does our diocesan vision to ‘become a communion of communities in Jesus’, ie small groups studying, discipling one another, church planting and rooting, growing in faith and changed lives together.’ They have seen and continue to see phenomenal church growth, and the dicoese is now preparing to multiply into three diocese. This summer Helen published an article in New Wine magazine in which she wrote:

To read the full article, ‘Something different, something significant’ click here.

In South Africa Rooted in Jesus continues to grow very rapidly. The following story came from Amanda Ohlsson, RinJ trainer with Growing the Church, from the Diocese of Cape Town, where RinJ is in use in a single pilot parish:

Finally, Rooted in Jesus continues to grow in Uganda, where it has been introduced to 4 dioceses, with another planned for 2014. We have discovered that RinJ was featured in an issue of the Church of Uganda magazine Courage. Archdeacon Japheth is quoted as saying “I thank God for Rooted in Jesus because Christians’ spiritual lifestyles have been revived through that method of ‘Get rooted in Christ”; and there is a testimony: “One RinJ group member had been a Muslim. He said, “I didn’t know who Jesus was, but now I do. I’m telling all my family and friends that Jesus is the right way.” 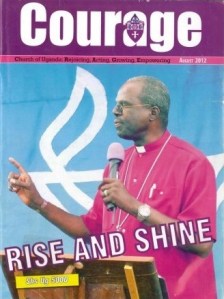 Team members continue to return inspired and refreshed from the conferences. Dave Smith, a youth minister in Cornwall who went on the RinJ Junior team to Tanzania in June, summarised what he had got out of the visit on his return:

“The trip was amazing. There’s nothing quite like the ‘hunger’ and hospitality of the African church.  I summarised the impact of the trip to me personally in the following points:
1.  We must learn again to live like missionaries, whoever we are in the community.
2. Live generously
3. Speak tenderly
4. Slow down for people
5. Work hard. Rise early in the morning.
6. Show hospitality.
7. To reduce ‘problems’ get on mission together
8. Practise humility
9. Be gentle.
10. Be expectant
11. We must decide to serve one God.”

David Smith and the RinJ Junior team in Tanzania

Finally, thank you to all those of you who responded, or who pledged to respond, to our financial appeal in September. Jonathan Rendall’s sponsored walk raised just under £500, and we received a number of generous donations from individuals. Several churches have indicated that they would like to support Rooted in Jesus regularly, and the Diocese of Lichfield has decided to include RinJ in its Lent Appeal this year. We still have a long way to go if we are to honour all the invitations we are receiving, and we are asking more of host dioceses than we would like to – but we are immensely grateful to the Lord for the provision you have made, and we continue to trust in him for the future! If you have not yet contributed to the appeal but would like to do so, donations can be made very simply online by clicking on this link: https://mydonate.bt.com/donation/donate.html?charity=rootedinjesus – or by sending a cheque payable to Rooted in Jesus to Frances Hazell at the office.

Rooted in Jesus involves many people – perhaps 75,000 in groups in Africa, with many team leaders and diocesan coordinators who work tirelessly and often in trying and sometimes dangerous situations to support them. Teams travel in their own time and at their own expense, and our dedicated group of intercessors support them daily in prayer as they work. Still others pray in local churches, and give financially to make this ministry possible. I am immensely grateful to all of you, and feel very privileged to be part of what the Lord is doing among his people. Allow me to share with you this encouragement received recently from Michael Harvey, founder of Back to Church Sunday, alongside whom I was privileged to work last year at the Anglicans Ablaze Conference in Johannesburg: “RinJ is the most significant kingdom extending tool I have seen around.”